Maria Kang Doesn’t Hate You. What’s Your Excuse For Hating Her? 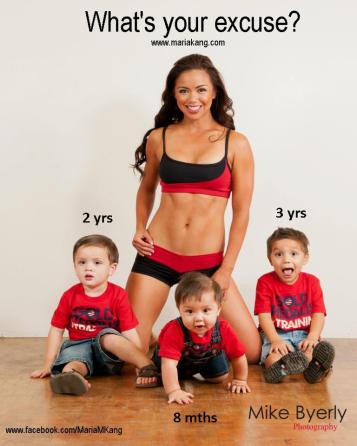 The femisphere got busy this week putting yet another confident woman in her place: Humiliating her, belitting her, accusing her of being a bad mother–you name it, she’s guilty of it. You’d think this woman had the power and position of a pop star or political leader. You’d think that she’s using her power to convince people to walk off a cliff or go to war. The truth? She’s a fitness professional who posted a Facebook picture of herself in workout clothes with her kids along with the text, “What’s your excuse?”

Therefore, according to some some, Maria Kang is a very bad woman. She hates fat people, poor people and the lactose intolerant, she’s sees her kids as a terrible burden–they may not even be hers–she doesn’t actually work out, and worst of all, she wants you to feel bad because you’re not beautiful. She even has issues with your body hair. They know this because she posted a picture of herself on Facebook. They know this because she is, according to the narrowest and yet still standard definition of “beauty,” seriously hot. They know that since she likes her body, she must hate yours.

Let’s take a step back. What do we actually know about Maria Kang? We know she used to compete as a fitness professional. We know that she founded a non-profit called Fitness Without Borders to fight childhood obesity. We know that she’s a mother of three, a writer, and the owner of two elder care facilities. That’s it.

What can we interpret from the picture she posted a year ago on Facebook? Given that we know that she has made it her job to proselytize on the importance of fitness, given that she’s wearing workout clothes and her kids are in the picture, and given the text, “What’s your excuse?”, we can logically interpret that she thinks kids are not an excuse not to be fit.

That’s all. There’s nothing else there. The caption does not say, “what’s your excuse for not looking like me?” It does not say, “If you don’t look like me you suck.” It does not say, “I hate my kids because they make it hard to exercise.” In fact, the only legitimate critique I’ve heard of this meme came from a friend, a mother, and a fitness enthusiast who said,

I do not care for the word, “excuse” because the word implies that I am making excuses for why I can’t look like her. I am someone who cares about fitness and changed my work schedule to permit me to work out while kids are at school. But “excuse” has negative connotations. It is a good ad concept–coming from a former advertising person–but as a mom who wants to be fit, I would prefer a “you can do it, Too!!” tagline.

It’s true: Encouraging people instead of accusing them of making excuses would be a more effective way to get people to prioritize fitness. But that’s the only level on which anybody has any right to evaluate this photo, because that is the only function it exists to serve. Kang is a fitness professional, not a barometer for fat acceptance, and, unlike her critics, she’s not hating on other women for their attitudes towards their bodies. She’s proud of her body and she should be. Every woman has a right to feel good about the way she looks.

Being fit empowers thousands of women. It makes them feel strong and sexy. Other things empower other women to love their bodies–wearing clothes that they love, eating whatever they want, refusing to conform to ridiculous beauty standards–it’s all good. There’s waaaaaaay more than one way to be empowered, and to tell this woman, publicly, over and over, that she should not be proud of her body because it makes other people feel bad is, to be frank, as anti-feminist as fat shaming and slut shaming.